Christopher Nolan’s next movie “Oppenheimer,” a $100 million-budgeted historical drama about physicist J. Robert Oppenheimer and the creation of the atomic bomb, could be considered one of an endangered species.

These days, it’s rare for traditional studios to pump nine figures into a film that isn’t inspired by popular toys, novels or comic books. Even before COVID-19 upended the moviegoing landscape, audiences had been gravitating toward superheroes and science-fiction spectacles — and not much else. That reality has made it increasingly difficult for Hollywood to justify the economics of greenlighting expensive movies that aren’t based on existing intellectual property. They’re a bigger risk, not only in recouping investments for studios, but also in generating profits, spawning sequels and leveraging consumer product riches. No matter how well people receive Nolan’s film, it’s unlikely J. Robert Oppenheimer’s face will adorn t-shirts or lunch boxes.

By backing “Oppenheimer,” Universal Pictures is making a bold bet that the right director can still get audiences excited to visit cinemas for original content. The film, which isn’t due in theaters until 2023, will need to defy the odds to become commercially successful. On top of its $100 million production budget, the studio will need to spend $100 million more to properly promote the film to global audiences. Because Nolan’s contract guarantees he receives first-dollar gross — an increasingly uncommon perk that grants the filmmaker a percentage of ticket sales — it will take $50 million to $60 million more to achieve profitability than it would take another film of similar scope. Consequently, insiders at rival studios estimate “Oppenheimer” will need to generate at least $400 million at the global box office in order to turn a profit.

That box office benchmark is one that Nolan’s films haven’t had trouble clearing in the past decade, with the exception of “Tenet,” which opened in theaters at a time when COVID-19 vaccines were still months away. And despite the circumstances, the Warner Bros. cerebral thriller — starring John David Washington and Robert Pattinson — managed to collect $363 million worldwide. “Tenet” cost more than $200 million, making it nearly impossible to turn a profit in those conditions. When it comes to Nolan’s other original properties, 2010’s “Inception” grossed $836 million globally, 2014’s “Interstellar” made $701 million globally and 2017’s “Dunkirk” collected $526 million globally. In other words, Nolan is a filmmaker with an enviable box office track record.

Those who closely follow the industry point out that “Oppenheimer” won’t be the kind of gripping mind-benders that audiences have come to expect from Nolan, such as “Inception” or “Memento.” Instead, it’s a historical drama that’s firmly rooted in fact and physics. Unlike “Dunkirk,” which captures the heroism of British forces during the early days of World War II, “Oppenheimer” tells a darker story, one that exists in the moral murk of the past and is not only divisive, but firmly American. That could limit interest overseas, where Nolan’s films tend to make the bulk of their revenues.

None of this means people in the movie theater business are betting against Nolan. The reason that Universal’s chairwoman Donna Langley made it her mission to court Nolan after his relationship with Warner Bros. grew strained is that he’s one of the few directors who can take a bold swing and rake in hundreds of millions at the box office. It’s especially valuable at a time when Hollywood appears to be scraping the bottom of the barrel for IP that can be spun into cinematic gold. Case in point: There are (real) movies in the works based on the card game Uno, the crunchy snack Flamin’ Hot Cheetos, and the invention of Viagra. Because not every project can be derived from Marvel, Star Wars, James Bond, Jurassic World and Fast & Furious, studios are turning to filmmakers with unique perspectives who can launch a film based on their name alone. Privately, other Hollywood players have voiced their desire to see “Oppenheimer” succeed because it would encourage studio executives and financiers to take more chances on new ideas.

“[Nolan] is a unique talent with a very loyal fanbase. If you were to say someone else was doing a period piece about J. Robert Oppenheimer, I would say it would be difficult to get made,” says producer Peter Newman, the head of NYU’s Tisch School of the Arts’ MBA/MFA program. “Here, you know you’re going to get something different and original.”

There aren’t many filmmakers who are given the opportunity to create movies around new and unfamiliar ideas at that budget level, at least, not at traditional studios. (In a sign of changing times, Steven Spielberg, once a streaming service skeptic, forged a partnership for his company Amblin to produce new feature films yearly for Netflix.) When they work, in the case of Quentin Tarantino’s ode to 1960s showbiz “Once Upon a Time in Hollywood,” the studio and filmmakers alike can reap the benefits. Sony shelled out roughly $90 million to produce “Once Upon a Time in Hollywood,” which starred Leonardo DiCaprio, Brad Pitt and Margot Robbie and grossed $375 million at the global box office. When they flop, like Ridley Scott’s big-budget period piece “The Last Duel,” starring Ben Affleck, Matt Damon and Adam Driver, or Roland Emmerich’s $100 million-budgeted war drama “Midway,” the losses can be ruinous.

Filmmakers like Jordan Peele and Judd Apatow have a similar ability to churn out hits, but their movies don’t cost nearly as much to make. Recent would-be blockbusters or adult-targeted movies with sizable budgets, such as Michael Bay’s “6 Underground,” Aaron Sorkin’s “Trial of the Chicago 7,” David Fincher’s “Mank” and “Red Notice” starring Dwayne Johnson, Ryan Reynolds and Gal Gadot, were set up by or sold to Netflix. The streamer, as well as its competitors, doesn’t report box office grosses and relies on luring subscribers with fresh content, so it’s impossible to know what kind of financial impact those movies had.

Nolan could have easily sold “Oppenheimer” to a streaming service, which would have guaranteed him a massive payday without being subjected to the scrutiny of box office reporting. But he’s a big supporter of the big-screen experience and the struggling film exhibition industry.

Since “Oppenheimer” isn’t expected to debut in theaters until summer 2023, plenty could change in the movie theater business by then — for better or worse. There’s a chance it could launch in an environment that’s even more hostile to tentpoles that aren’t of the comic book ilk. Or, moviegoers could be ready to look beyond the constant drip of Batman, Superman and Spider-Man adventures and watch something that doesn’t involve grown men in tights.

With an original property, marketing executives have to familiarize audiences with the property while also enticing them to watch the story in theaters. In the case of “Oppenheimer,” Universal has to make people aware that Nolan has a new movie and convince them they simply must watch the story behind the Manhattan Project on the big screen. Nolan is assembling an A-list ensemble — Emily Blunt, Matt Damon and Robert Downey Jr. — around Cillian Murphy (who is playing J. Robert Oppenheimer) to elevate the movie’s profile.

Another challenge will be reaching its target demographic of adult crowds. They may be more eager to go to the movies two years from now, but while COVID-19 is still lingering, the age group has been most hesitant to visit their local cinemas.

“There used to be at least one level of uncertainty in how movies perform: execution dependent,” Newman says. “Now, it’s not only execution dependent, it’s pandemic dependent. It takes over a year to make a movie like this, and nobody knows what the health situation will be [at the time it comes out].”

How Stellantis has improved the dealership experience for customers

Mon Nov 22 , 2021
“The dealers bought in to it pretty quickly,” Jeff Kommor, the automaker’s head of U.S. sales, told Automotive News. “They committed to the tablet usage, one for every salesperson.” The effort is part of a larger push by Stellantis CEO Carlos Tavares to address the sales experience at dealerships, which […] 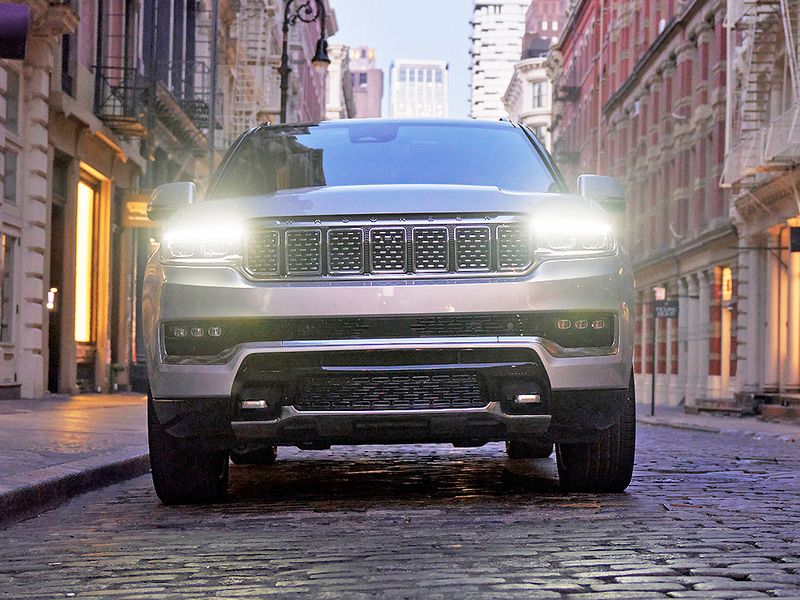